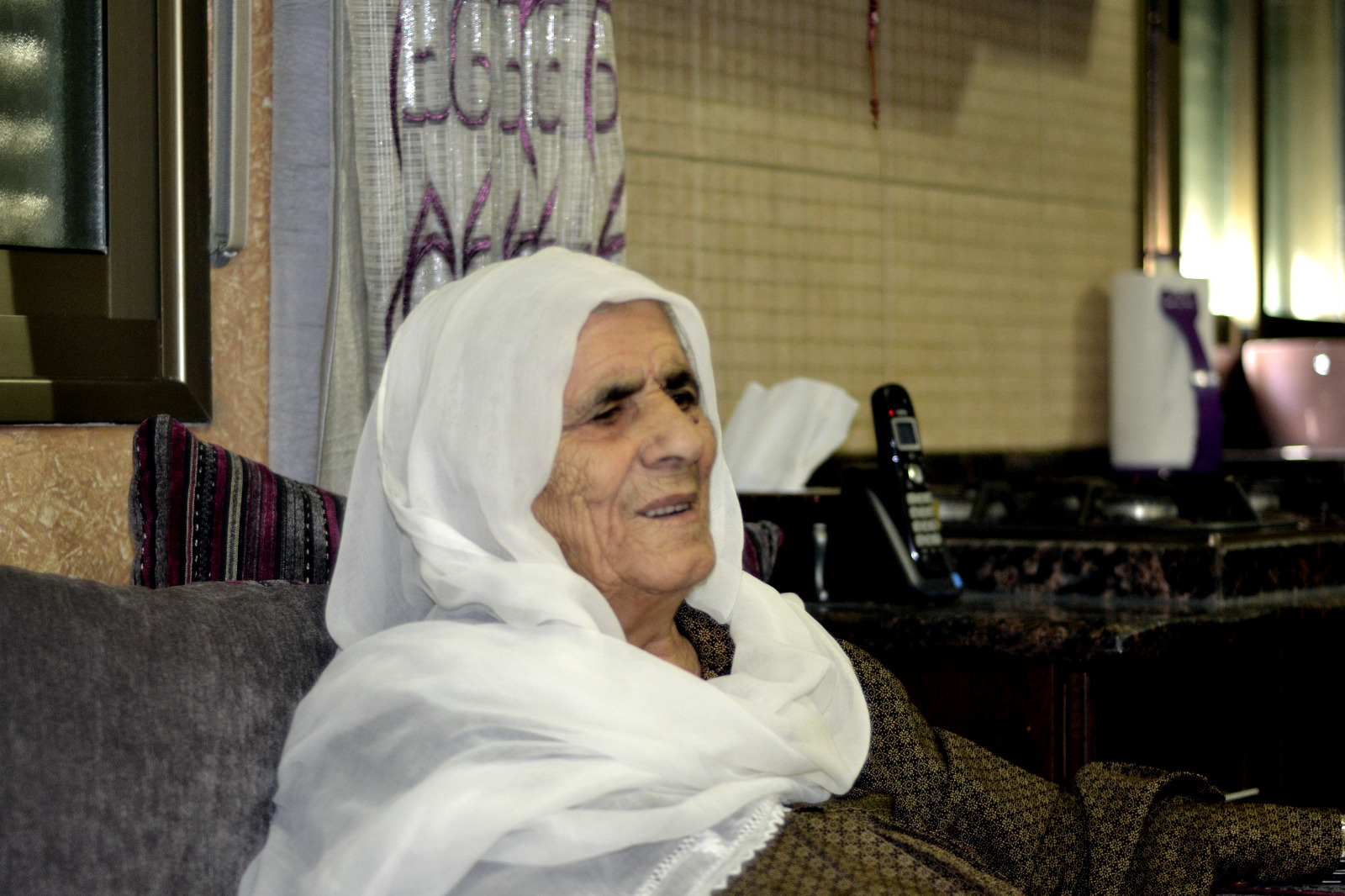 The Israeli military occupation of East Jerusalem, the Westbank and the Gaza Strip lasts for more than half a century, since June 6, 1967. 750.000 Palestinians fled then. For seven years I lived in a Palestinian, mostly Islamic, village between Jerusalem and Ramallah, with my family-in-law. During a recent visit I asked friends and relatives to tell me what the occupation meant for their daily life, and what they wished for. Here I interviewed three generations of women.

Nobody knows exactly how old Labiba Obeid is. Her relatives say she might be 82 or 83. She comes from Beit Aad/Zakarya, a little village near Hebron and is now living in the Deheishe refugee camp (near Bethlehem). She is a small woman, tanned, wearing a white scarf loosely around her head.

“Last night I dreamt of our little village again. How we went for water to the well, how we planted trees, how we picked grapes and olives.

I was born in the time of the British mandate over Palestine. In 1947 Jewish troops started bombarding near our village. Our family had to flee. The United Nations organized tent camps for the refugees near Jericho; as a family one received two sticks and a piece of cloth. We stayed there for eight months and then were transferred to Deheishe.

One day I was baking bread when a man came along. He wanted to try a piece of the bread and then said: “This is the most delicious bread I have ever tasted!” He also came from Zakarya and we got married. Because we could not go home, we built a room of concrete and when the children were born we added more. Like everyone else. And in the meantime we were waiting.

In 1967 the Israeli soldiers crossed the green line (the demarcation line between Jordan and Israel) and tried to take more land. We could see the Iraqi and Jordananian soldiers with their guns, there, on that mountain. But they did not want to fight and the soldiers dropped their weapons. For the second time we fled, but finally we returned to Deheishe.

Everybody is to be blamed for the fate of the Palestinians. We are no longer being considered as human beings, by nobody. In Zakarya almost everything has been destroyed.”

After a long silence she answers my question, what she most of all would wish for. Almost inaudible she replies: ”I wished we never made the decision to leave.”

Amal Khreishe (early sixties), president of the Palestinian Working Women Society, lives in Ramallah, ready to laugh, and sucking on her waterpipe

“I was nine years old when the war broke out, and lived in a little village near Tulkarem, on the Green Line. My grandfather had land in de vicinity of Jaffa, but his land was confiscated.
When the 1967 war broke out we smelled the Naqba again (the catastrophe of 1947-’48, TB). Tanks and army vehicles arrived and soldiers chased people out of the village. There they forced us on our knees, and bound our hands on our backs, even the forty children, and took us to busses afterwards. Later one of the inhabitants tried to flee and was shot dead; my older brother kept his hand before his eyes while this happened. A Jewish officer refused command and allowed us to go home after two days.

Already at an early age I began to demonstrate against the regular arrests of men. When I was ten, soldiers beat me with sticks, and when I was older the secret service, the Shin Beth, invaded my family home because I assisted in setting up a cultural magazine. They wanted me to tell everything about my family, but I refused, and the SB advised my father: ”Get her married, she is causing trouble.” I realized that damaging the rights of the Palestinian people, of public rights, was converging with damaging the rights of women. Later I started to fight for women’s rights. In 1992 I set up the First Palestinian telephone line for reporting domestic violence.

The occupation is dominating every aspect of our lives: economical, psychological, in the area of mobility, in the lack of security. Yes, it even makes you another person. Every time I have to pass a ckeckpoint I am losing more of my dignity. And of humanity. But I do not want hatred to have a place in my heart. Because I know that I must not generalize and that there are good Jewish people too.

And yet, in spite of this long occupation, I am optimistic. In our time we have ten thousand checkpoints, an apartheidswall, executions, settlements. But we won’t give up. And the young people will continue. What I want for all of us, for the Palestinian people, is dignity. And certainly justice will win.”

Isra Sharia, 22 years old, born in Deheishe, student at the Bethlehem University and granddaughter of Labiba

“The occupation gives you the feeling of not belonging anywhere. Even if you have your whole family around you, you are a stranger in this country where you were born. It also means that I cannot do what I want to do, that I cannot go where I want to go. It is all a question mark where you and your family will end up.

In daily life the occupation scares me. Any moment soldiers can enter the camp, and then they are especially after the boys and the men. Usually this happens between four and six o’clock in the morning. You can smell teargas everywhere, there are shootings, people are being arrested and people are dying. You never know when they will come.

During the last few years the situation has only become worse. They are talking about a peace process all the time, but we cannot see anything happen. With hollow words they are trying to convince us to surrender.

What is my dearest wish if there would not be an occupation? I can hardly leave Deheishe and have not seen much of my country yet. Nothing is left from Zakarya. One time I visited Jerusalem, one time Jaffa and one time Acco, with special permits of the Israeli’s. That was all. The first thing I would do when I am free, is travelling around and finally to get to know my country.”

(this is the translation of an earlier article I wrote in Dutch, special thanks to Nel Bennema)